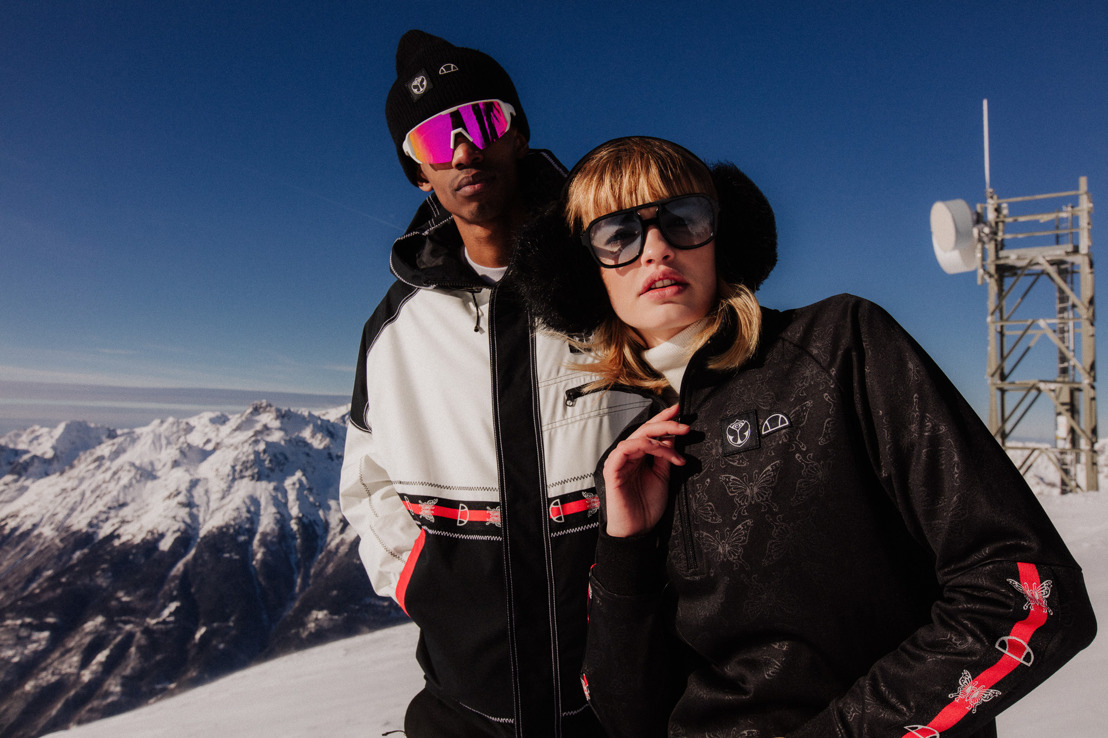 Monday, 30 January 2023 - Tomorrowland Winter has joined forces with Ellesse as official partner to present an exclusive ski capsule created for distinctive personalities to be bold and stand out from the crowd. The Italian sports lifestyle brand ellesse brings their rich ski heritage to the collaboration, combining the energy of Tomorrowland with the flamboyance of ellesse.

The 21-piece Tomorrowland Winter x Ellesse capsule offers a modern take on ski, inspired by Ellesse's rich history and back catalogue reinterpretated with a modern attention to detail to inject personality and flamboyance. The range features a colourway of pink, red, white, and black in combination with a playful yet bold iconic Tomorrowland butterfly on its taping to stand out against the all-white of the slopes.

These high-quality outerwear pieces allow you to focus on keeping warm and layering in style and attitude. Whether that is downhill on the slopes or all in at Tomorrowland Winter in Alpe d’Huez. Also featured are new collaborative pieces from Capita (Snowboard) and Melon (Goggles & Sunglasses), the latter of which has contributed an entire new capsule. The collection offers fashionable yet high-performance wear ready for ski season and the magic of the Tomorrowland Winter festival.

The campaign features four diverse talent from across Europe that Tomorrowland and Ellesse took to the heart of the festival in Alpe d’Huez.

Henri PFR Belgian composer, producer and DJ, Henri PFR is the dance-pop golden boy. In his short career Henri has featured at major festivals including Tomorrowland Winter, Lollapalooza, Ultra Music Festival and more. His creative talent has seen him work with the best of dance music artists including the likes of Robin Schulz, KSHMR and Blasterjaxx.

Connie Constance Watford-born UK Singer-songwriter Connie Rose Power aka Connie Constance has been making bold moves in the music industry. Signed to indie music label Play It Again Sam, she has been busy creating indie pop tracks infused with punk and soul that her true riotous roots. Named artist of the month for BBC Radio 1 in August 2022, Connie whose last EP “Miss Power” released last year, has also made vocals for Swedish House Mafia, proving her versatile sound can work on rock anthems as well as euphoric dancefloor fillers.

Montell Martin London born and raised Montell Martin is a seasoned model and curator of style. Working for a number of high fashion brands Montell brings the cool to the Alps in the Tomorrowland Winter x Ellesse collection.

Get ready for the Tomorrowland Winter festival, with a week filled with music, dancing and snow sports in the magical settings of the Alps with Ellesse bringing exhilarating activations for you to experience.